The Community of Aragon is one of the seventeen autonomous communities comprising the Spanish state, and includes the provinces of Huesca, Teruel and Zaragoza, with a total of 739 municipalities (202 in Huesca, 236 in Teruel, and 291 in Zaragoza). It extends over a total of 47,650 square kilometres, Zaragoza being the largest province with 17,252 square kilometres, followed by Huesca with 15,613 and Teruel with 14,785. Aragon is the fourth largest Autonomous Community in Spain, only exceeded by Castilla-La Mancha, Castilla y Leon and Andalusia. It is almost ten times larger than the Balearic Islands, Cantabria or La Rioja and occupies 9.42% of Spanish territory. 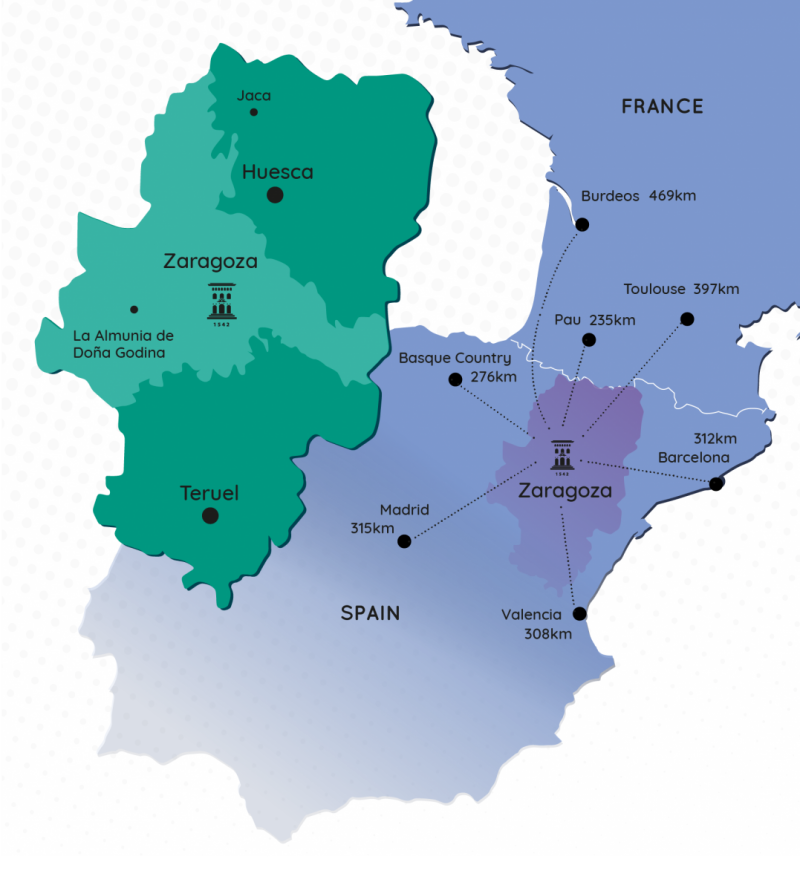 Aragon borders on the north with France, on the west with Navarre, La Rioja, Soria, Guadalajara and Cuenca, on the south with Valencia and Cuenca, and on the east with Castellon, Lerida and Tarragona. Thus, the Autonomous Communities bordering on Aragon include Catalonia, Castilla-La Mancha, Castilla y León, La Rioja, Navarre and Valencia.

The geography of Aragon features two mountain ranges, the Iberian system to the south and the Pyrenees to the north, and between them, a vast flat area in the centre that geographers refer to as the Ebro River Depression. The Ebro River is the most important water route from the northeast to the southeast of Aragon, with its Gallego, Huerva and Cinca tributaries and the Imperial and Tauste canals. The irrigable area is the richest and most populous part of Aragon, while the dry and mountainous areas are the least populated.

Las Bardenas, north of the Ebro River, and Los Monegros to the east are dry, semi-desert, depressed areas. To the south, the Moncayo Massif (with an altitude 2,345 metres) is the first encounter with the Iberian Mountain Range, followed by the Turolense Mountains of Albarracin, the Montes Universales and Javalambre, with the San Juan Peak (1,870 metres) and Javalambre Peak (2,020 metres). To the east, the Cucalon and San Justo Mountains separate Aragon from the province of Castellon.

As the geographic centre of the hexagon formed by Madrid, Valencia, Barcelona, Toulouse, Bordeaux and Bilbao, Zaragoza is a key city in southeast Europe. It is located at the centre of an area in which within a radius of 350 kilometres 60% of the Spanish population resides and 80% of the country’s Gross Domestic Product (GDP) is produced.

The University of Zaragoza has campuses in the three provinces of the Autonomous Community of Aragon.

The city of Zaragoza is located at an altitude of 240 metres above sea level, on the right bank of the river in the Middle Ebro Valley, where in addition two other rivers, the Gallego and the Huerva, and the Imperial Canal of Aragon flow together. The 2001 census placed its population at 614,905 inhabitants, making it the fifth largest city in Spain.

Zaragoza is the capital and political and administrative centre of the Autonomous Community of Aragon, one of the 17 Autonomous Communities comprising the Spanish state. It has a total area of 47,650 square kilometres, or 9.44% of the national territory. The metropolitan area covers1,059.9 square kilometres, thus being one of the largest in Spain.

Zaragoza is an incomparable city. Its Iberian, Roman, Moslem and Christian past have each contributed their part to making it the beautiful and surprising city it is today.