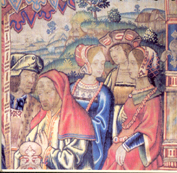 This former upper-level school existing in Zaragoza since the 12th century, created and financed by the local church, a modest study of arts which taught grammar and philosophy and granted the diploma of “bachiller” was raised to the category of "universitas magistrorum", in the style of the University of Paris, at the request of the Prince Fernando el Catolico, at that time King of Sicily, by the authority of Pope Sixtus IV on December 13th 1474, being ratified by the same Pope on December 1st, 1476 and by King Juan II of Aragon on January 25th, 1477.
The ecclesiastical council of Zaragoza and the elders of the city were the promoters of this General School authorised to grant the degrees of “bachiller”, “licenciado” and master in arts.

The council appointed Pedro Arbues and the city appointed Pedro la Cabra the Younger (a graduate in arts and medicine designated to be the high master or rector of the former school) to draft the first bylaws. The university would enjoy the same rights as the Universities of Paris or Lerida. And to avoid conflicts between the council and the Rector, La Cabra the Younger was appointed Vice Chancellor, leaving the post of Chancellor for the Archbishop of Zaragoza. But various circumstances delayed the actual opening of the General School and on September 10th, 1542, at the urging of the council members of Zaragoza, Carlos I signed at the meeting of the Cortes at Monzon a privilege that raised the already-created school of arts to the rank of General University of All Disciplines: in it one could study theology, canon and civil law, medicine and philosophy.

The original document has been preserved at the Zaragoza Town Hall. This rank of university for the former school was confirmed by papal authority ten years later when Julius III issued a bull on March 6, 1554, confirmed by Paul IV on April 28th, 1555. But this legal birth preceded by thirty years the effective operation of the University of Zaragoza. Differences between the archbishop and the council concerning the appointment of the rector, complaints from the University and the city of Huesca that culminated in 1572 against this foundation in Zaragoza, and the difficulties in obtaining funds for the University from the permanent council of the Kingdom of Aragon and from the city government of Zaragoza delayed the commencement of teaching until September 3rd, 1582 on which Pedro Cerbuna, Prior of San Salvador de Zaragoza and later Bishop of Tarazona, contributed the necessary economic means to repair and renovate the building of the former school. The former chapel (called the Crucifix and dating from the early 15th century) was preserved, and a theatre, large cloisters and a fine library were provided, as well as funding for the first professorships.

Having finished construction, drafted the bylaws and hired the professors in charge of the teaching, on May 20th 1583 Cerbuna obtained from the elders of the city final approval of his work, and Juan Marco, Archdeacon of Daroca in the council of the Cathedral, was appointed the first Rector. Zaragoza, which had avoided the intervention of Philip II in this difficult founding, notified the monarch of its existence after-the-fact, thus giving rise to a great offensive from the Court against the new University, especially on the part of Huesca. But Brother Jeronimo Xavierre, Prior of the Convent of the Predicadores in Zaragoza and later Cardinal, gave the inaugural lecture, thus commencing the teaching activities at Zaragoza on May 24th, 1583 and initiating a tireless defence of the new University in the court of the King.

When those political difficulties became known, new university bylaws were passed in 1587 and 1597. By then, 26 professorships had been created and Zaragoza was negotiating in the court of Philip III to obtain official sanction for the University. In 1599, the King bestowed on it his blessings and participated personally in the graduation ceremony. The official opposition of the Court had come to an end. Thus was born the University of Zaragoza, following the model of the University of Paris, with a faculty of professors divided into schools and organised as an autonomous corporation to which the founder, Pedro Cerbuna had conferred all of its powers in its bylaws. But already in 1618, new simple and precise bylaws gave the city council rights to intervene in the University, granting prominent powers to the city government as one of its main characteristics. A no less typical provision excused students from wearing their academic robes. The new bylaws of 1625 followed these same lines and were confirmed twenty years later by Philip IV.

These bylaws were careful to provide for professorships, the origin of many conflicts among religious orders with different scholastic leanings. Another aspect, the participation of students in the choice of professors, was eliminated in 1723.

The University of Zaragoza, like other universities in the country, gradually lost its autonomous powers with the increasing power of the Crown. The University enjoyed a magnificent first half-century, which was followed by sudden decadence commencing in 1610. In 1618 conflicts arose with the schools of the Jesuits, the ineptitude of many professors was evident, many teaching positions were left vacant, and the post of Rector became a coveted privilege monopolised by the canons of the Cathedral. But despite all of this, the level of enrolment of students from Aragon, Navarre and La Rioja remained high (although in lesser numbers from Huesca, which had its own university). The new dynasty put the accent on standardising universities. Philip V centralised the university system and regulated access to professorships. The Marquis de Ensenada’s project did not provide any remedies, although it did initiate a lukewarm attempt at research. But Fernando VI interrupted these trends and Carlos III increased centralised intervention by appointing a delegate of the central government in each university. Despite these circumstances, in 1782 the University of Zaragoza still had two thousand students, although the majority were the so-called “perpetual” students who never quite finished their studies. In 1807 the University of Zaragoza was among the few universities that were not closed down, receiving bylaws based on the model of the University of Salamanca, and professorships became tenured positions. During the second siege of Zaragoza, on February 18, 1809 the original university building was bombarded. During the first half of the 19th century the languid life of the university reflected the political events of the time and centralisation increased in all areas. In 1832 the post of chancellor was eliminated, a post that had been held since the foundation of the University of Zaragoza by the archbishop, albeit as an honorary title. In 1845 a new programme of studies reduced the schools at the University to Arts and Letters, Law and Theology, the latter being eliminated in 1868.

Dependency on the political authorities increased, following the “Napoleonic” model, and outside of its confines, courses of studies appeared that were not offered at the University.

With the dawn of the 20th century, Zaragoza also felt the proliferation of new studies, their extension to all levels of the population, and a lack of economic resources to develop the experimental sciences.

Left behind were the two and a half centuries of autonomous life in which Zaragoza provided teachers for the Universities of Paris and Salamanca, when its classrooms were honoured with the teachings of the mathematician Gaspar Lax, the humanist Juan Lorenzo Palmireno, the jurist Jose de Sesse and the scientist Pedro Simon. Through the halls of Zaragoza had walked the historian Espes, the classicist Lorente, the jurist Portoles, the canonist Ejea, the doctor Royo, the first director of the Royal Academy of History Montiano, the bibliographer Latassa and the geographer Antillon. From its classrooms emerged singular students such as Miguel Servet, Jeronimo Blancas, the Archbishop Pedro Apaolaza, the Argensola brothers, the historians Andres and Sayas, the erudite traveller Cubero, Blas Antonio Nasarre, the economist Asso, the statesmen Aliaga, Roda, Marquis de la Compuesta and Calomarde. Until the unionist reform of 1845, 128 rectors had put their personal seal on its academic history, among them, Fraila, Carrillo, Ramirez, Martel, Azlor and Pignatelli. In the 20th century Zaragoza has continued this record of university achievements. Former students occupy numerous professorships throughout the country, first-rate experimental scientists have promoted the practical applications of their studies in industry (chemical, sugar, cement, etc.), and from the University many fine statesmen, humanists and medical scientists have emerged.